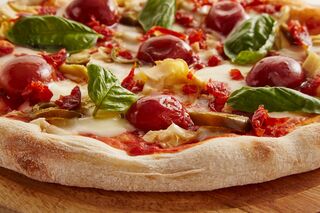 If the crust is whole-grain and the topping is vegetables, even a pizza fits into a Mediterranean-style diet.

Whenever we hear news about the relationship between diet and health, the Mediterranean Diet inevitably pops up. Here’s why it deserves your attention.

Between 1948 and 1964, researchers looked at the post-war diet of people living on the island of Crete in Greece. They discovered that the diet was not only nutritionally complete and associated with good health, but also with the lowest rates of heart disease. Additionally, in the early 60s, data collected by the World Health Organization (WHO) revealed that the life expectancy of the Greek people predicted at age 45 was the highest of any country. In the 1990s, researchers from Harvard University and WHO, in association with a food and nutrition nonprofit group known as Oldways, fine-tuned the Mediterranean diet and presented it to the America people in the form of a Mediterranean diet pyramid. The pyramid was based on studies from both Greece and southern Italy.

Since then, the Mediterranean diet has become the definitive eating plan for those who put healthy eating and healthy aging at the forefront of their personal concerns. Every year, when various popular diet plans are reviewed by experts for recommendation to the public, the Mediterranean diet hits the top of the list. And with every passing year, more and more knowledge is added to the body of research that shows the benefits of a Mediterranean-style diet are even bigger and better than first thought, and applicable to just about everyone.

In addition to longevity, research has linked the Mediterranean diet to reduced risk of:

Stress-Related Illness. Stress is known to increase the production of inflammatory chemicals in the body. Studies have shown that adherence to the Mediterranean diet may counter that effect, reducing products of stress and thereby protecting against the damage resulting from inflammation.

Depression. Research indicates that the Mediterranean diet may help reduce the risk of depression because the components of foods typically included in the diet, along with reduced intake of red meat, protects against inflammation and damage to brain cells.

Cognitive Decline. Although there is no evidence of a cause-and-effect relationship between diet and cognitive function, the majority of related studies found that adherence to a Mediterranean diet is associated with improved cognitive function and decreased risk of cognitive impairment/dementia.

Cardiovascular Disease. Numerous studies performed over the past 70 years have confirmed that the Mediterranean diet protects against cardiovascular diseases including cardiovascular heart disease and ischemic stroke.

Overweight/Obesity. A 2019 study of non-human primates from Wake Forest Baptist Medical Center found that those who were given a plant-based Mediterranean diet ate fewer calories, had lower body weight and less body fat than those who were given a diet formulated to resemble a Western diet. The study lasted a little more than 3 years, during which the primates were allowed to eat as much food as they wanted. Those on the Mediterranean diet chose not to eat all of the food that was made available to them, while those on the Western dit chose to overeat.

Prostate Cancer. Dietary links to prostate cancer are thought to be both a low consumption of vegetables and fruits and high consumption of red and processed meats. Sticking to a Mediterranean diet means just the opposite: High consumption of vegetables and fruit that contain cancer-fighting phytonutrients found only in plant foods, and limited amounts of red and processed meats that are associated with inflammation. In particular, a Mediterranean-style diet often includes an abundance of tomatoes and tomato products that are high in lycopene, phytonutrient that is highly effective at reducing inflammation.

Lung Disease. A study of approximately 43,000 men found that those who consistently followed a Mediterranean-style eating pattern had half the risk of developing chronic obstructive pulmonary disease (COPD) than those who ate a typical Western diet higher in processed foods, refined sugars, and cured and red meats.

Osteoporosis. Although researchers are still trying to figure out the “hows and whys,” multiple studies have shown that a Mediterranean diet can help maintain bone density, thereby preventing excessive bone loss and reducing bone strength, thereby reducing risk of fracture.

Poor Gut Health. A European study published in 2020 found that sticking to a Mediterranean diet for at least one year improved the diversity of “good” bacteria, known as the microbiome, in the gastrointestinal tracts of older men and women. A balanced, healthy, diverse microbiome reduces the production of harmful inflammatory substances in the body.

Find out more about the benefits and guidelines of the Mediterranean Diet, and other traditional diets, at Oldways Cultural Food Traditions.

If You’re Not Losing Weight On Your High-Protein Diet, Here’s What Might Be Going...

Can Dogs Eat Peas? Are Peas Safe For Dogs?