Home Superfood POTATO BEANS are excellent sources of protein and fibre – and they...

From chia seeds to kale leaves, several trendy ‘superfoods’ have gained in popularity in recent years.

And a new study suggests that the next superfood to take the UK by storm could be the potato bean.

The wild plant is high in protein and fibre, and could be grown in the UK and offer an environmentally friendly source of protein, scientists believe.

It was once commonly foraged by Native Americans and Scottish researchers have now investigated if the plant could be cultivated in the UK.

If it was grown in the UK the researchers say it could become part of the British day-to-day diet and also be used as animal feed. 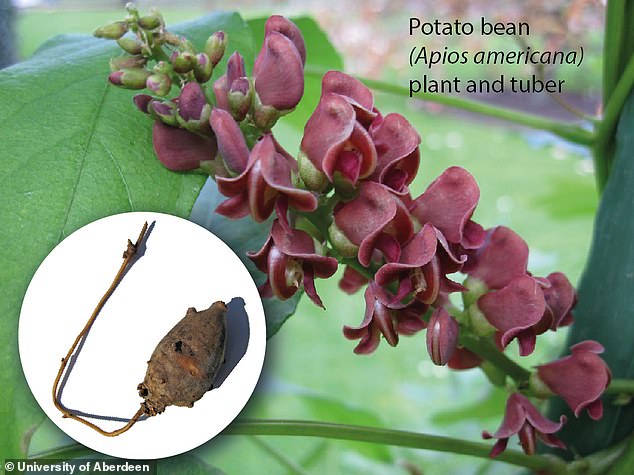 Agriculture has a significant impact on climate change including through changes to average temperature, rainfall and heat waves.

This is due in part to greenhouse gas emissions from a range of sources including livestock and crops.

Agriculture accounts for about 14 per cent of the total greenhouse gas emissions around the world.

The global food system as a whole contributes 37 per cent of all greenhouse gas emissions.

Underground tubers of the purple-petaled plant are 15 per cent protein — roughly three times as much as a normal potato — ten per cent fibre and packed full of micronutrients such as calcium, zinc and potassium.

Outside of these potato-like nuggets, the leaves of the plant also offer good nutrition, with higher protein and fibre levels than the tubers.

The plant is a legume in the bean family and not closely related to the potato.

Money from the Scottish government funded the study as officials look at the pros and cons of novel and sustainable sources of protein and fibre.

They hope that by being able to cultivate a wider range of foods they can improve the dietary range available to citizens.

Most sources of protein in the UK come from meat which has a large carbon footprint and agriculture is a leading contributor of greenhouse gas emissions.

Dr Madalina Neacsu, lead author of the study from the Rowett Institute at the University of Aberdeen, hopes introducing high-protein plant alternatives can help reduce these emissions while also offering an improvement to human health.

‘The potato bean has shown previously that it can adapt to a wide geographical range and has a high tolerance to a wide range of conditions, so it is able to grow in environments away from America,’ she says.

Japan is currently the only part of the world to grow the plant commercially.

But Dr Max Coleman from the Royal Botanic Garden Edinburgh says wild plants, such as the potato bean, are increasingly being considered for their nutritional value.

‘The potato bean is one example of the potential of wild plants to diversify our diet and build resilience in agriculture,’ he says.

‘There are an estimated 30,000 edible plants available to us and yet widespread consumption only involves about 150 of them.

‘Just 12 crops provide 80 per cent of our calories, meaning we rely on less than one per cent of the food plants available to us.’ 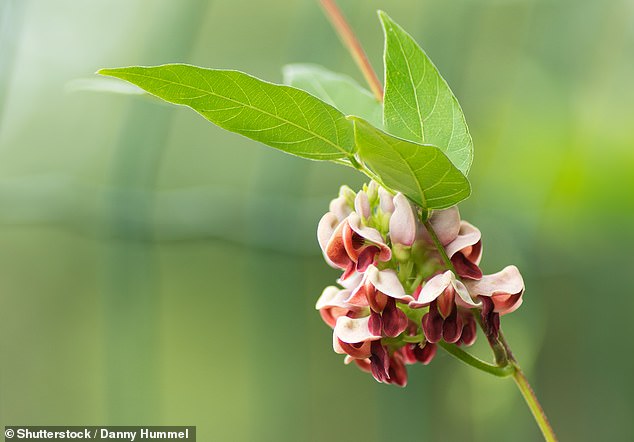 Outside of the potato–like nuggets of the plant, the leaves also offer good nutrition, with higher protein and fibre levels than the tubers

Underground tubers of the purple-petaled plant are 15 per cent protein — roughly three times as much as a normal potato — ten per cent fibre and packed full of micronutrients such as calcium, zinc and potassium

Scientists got hold of the plant from two sites in the UK and analysed its nutritional content.

They conclude that not only would it survive in the UK, but the plant, if turned into a regularly used crop, has ‘enormous potential’ in Northern European countries.

Dr Neacsu adds: ‘The potential benefits of the potato bean are promising – it is a rich source of protein and fibre, representing a good way to boost fibre consumption with can be a struggle for many people.

‘We also found in Apios samples that it contained all the essential amino acids that we need to make proteins in the body.

‘The peel and leaves are also a rich source of the bioactives which are normally found in superfruits such as berries.’

The study was published in the Journal of Food Composition and Analysis.

COULD INSECTS BE THE NEXT ‘SUPERFOOD’?

Edible insects have been touted as the next ‘superfood’, with the creepy crawlies packed full of protein, nutrients, potassium, magnesium and three times more fatty acids than omega-3 in salmon.

Insects contain more than twice as much protein per 100g as meat and fish, according to the Food and Agriculture Organisation of the United Nations.

Crickets are the most widely cultivated insects for the human diet across the world and are considered the ‘gateway bug’ for people who choose to eat insects.

They, along with other insects are touted as highly nutritious and much better for the planet – environmentally and financially – than traditional livestock, due to the comparatively efficient rate at which they convert feed into body mass.

The global population is predicted to top nine billion by 2050, putting enormous pressure on the environment, conventional food sources and farming techniques. Insects could help meet demand for food.

Plenty of people in non-Western countries already eat insects regularly. They are very efficient at converting vegetation into edible protein and full of vitamins and minerals.

Previous studies have found that four crickets provide as much calcium as a glass of milk, and dung beetles, by weight, contain more iron than beef.

Farming insects generates one-tenth of the methane produced by farming traditional meat sources, and it uses comparatively little water, making the process better for the environment.

Benefits of seaweed: Why you should be enjoying this superfood regularly

Why Do Dogs Age Faster Than Cats?

Eating well can improve both your physical and mental health

Is the Pet Food Industry in the Business of Population Control? – Celiac Disease...