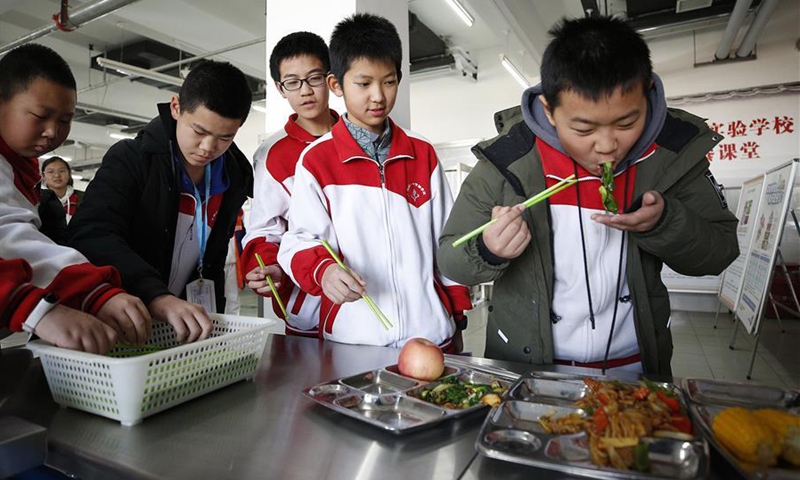 Students taste food during a nutritious catering class steming from the implementation of the “Nutrition School” project in the school kitchen of the Experimental School Affiliated to Niulanshan First Secondary School in Shunyi District of Beijing, capital of China, Dec. 20, 2019. Xinhua/Zhang Yuwei

More than half of the adults in China are overweight, and the obesity rate continues to rise among all age groups, according to a report released by China’s National Health Commission (NHC) on Wednesday.

The 2020 Nutrition and Chronic Disease Status Report of Chinese Residents, which was based on monitoring and investigations covering nearly 600 million people nationwide, showed that weight problems have become an increasingly prominent issue in China.

Physical inactivity is one important factor related to obesity, the report showed, noting that fewer than one-quarter of Chinese adults exercise at least once a week. Excessive consumption of meat, combined with low consumption of fruit, soy and dairy products, contributed to the overweight problem.

Children in China have become heavier as well. About 10 percent of children under 6 years old are obese, and the rate reaches 20 percent for children aged 6 to 17, according to the report.

For children, frequent consumption of sugary drinks is a prominent cause, said the report. About one-fifth of primary and middle school students in China “often” drink sugary beverages, it noted.

As the obesity problem worsens, the incidence of chronic diseases is also on the rise. Rates of hypertension, diabetes, chronic obstructive pulmonary disease and cancer, which are the leading causes of death in China, have all increased compared with 2015.

“High prevalence and wide coverage is the main characteristic of the current obesity situation of Chinese people,” said Zhao Wenhua, chief nutritionist at the Chinese Center for Disease Control and Prevention, at a press conference to release the report.

Li Bin, deputy director of the NHC, also said China has made progress in improving nutrition and preventing and controlling chronic diseases among Chinese people.

The report found that Chinese people’s health awareness has been gradually enhanced, and the prevalence of behavioral risk factors for some chronic diseases, such as drinking and smoking, has declined.

The premature death rate caused by the four chronic diseases fell to 16.5 percent, two percentage points lower than in 2015.

The physical development of children and adolescents has continued to improve, and the growth retardation rate of children under 6 years of age has been fundamentally ameliorated, especially in rural areas.

Is it ok to lose weight quickly? What you need to know