SIOUX FALLS, S.D., Nov. 19, 2020 /PRNewswire/ — OmegaQuant, the leader in omega-3 testing, has launched a Vitamin D Test with a sample collection kit that allows you to test from home. The simple, safe, convenient test requires just a finger stick and a couple drops of blood for analysis — just like its range of omega-3 blood tests. 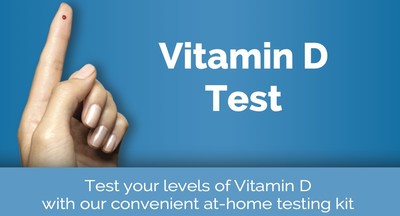 OmegaQuant’s Vitamin D test is a simple, safe, convenient way to find out if you are getting enough from your diet.

Vitamin D has played a major role in bone health for decades. During the last several years, however, new research has brought to light the crucial role it likely plays in a wide range of other health issues, from cardiovascular disease to immune function to obesity.

Similar to omega-3s, vitamin D has received a lot of attention over the last couple of decades from individuals who are looking for ways to add more to their diets or modify their lifestyle. But how much more? Most people don’t know unless they test their blood level.

Similar to the way the Omega-3 Index Test assesses the dietary intake of omega-3s EPA and DHA, OmegaQuant’s Vitamin D test can track someone’s nutritional status. Vitamin D, like omega-3s, can be an elusive nutrient for many people depending on their diet and where they live, which makes measuring blood levels especially important.

While the issue of protective levels of vitamin D has been hotly debated over the years, many experts believe that having a level of at least 30 ng/mL is the sweet spot for most people. It is easy to correct your vitamin D level in as little as a few months by increasing sun exposure or increasing dietary intake whether through food or supplements.

“Our new vitamin D test works the same way our omega-3 tests do – with a simple finger stick. No blood draw needed. No doctor necessary. No hidden lab fees. And you can collect your sample safely, in the privacy of your own home,” said Jason Polreis, CEO, OmegaQuant.

“We think that vitamin D holds just as much importance as a nutrient as omega-3s. And it suffers from the same issues in terms of intake in that the majority of individuals are falling short. But how short? The only way to know is to test.”

About OmegaQuantOmegaQuant is an independent, CLIA-certified lab that offers Omega-3 Index testing to researchers, clinicians and the public and sets the standard for fatty acid testing. OmegaQuant performs fatty acid analysis in Sioux Falls, SD, for commercial and academic research collaborators, and for consumers interested in monitoring their nutritional status in both blood and breast milk. Its goal is to offer the highest quality fatty acid analytical services to researchers and to provide simple tests of nutritional status to consumers, with the ultimate purpose of advancing the science and use of Omega-3 fatty acids to improve health. Most recently, OmegaQuant formed a partnership with CSIRO to help process lab samples coming from Australia and the APAC region, with a lab based in Adelaide, Australia. OmegaQuant also has a lab partnership with the University of Stirling, based in the Scotland, to help process blood samples from Europe.

Nutrition with Jane McClenaghan: Fuel yourself for Movember and for life

Leanne McCrate: Does NNS cause weight gain? | Lifestyles – The Independent

Why are some children taller? Diet a bigger factor than genes, Lifestyle News