The Daily Orange is a nonprofit newsroom that receives no funding from Syracuse University. Consider donating today to support our mission.

Although Meg Lowe is a sustainability coordinator at Syracuse University, her background is in culinary arts. Now, she’s bringing her skills in the kitchen to the virtual classroom.

Lowe teaches “Virtual Pantry Cookin’” classes along with Syeisha Byrd, the director of the Office of Engagement Programs at Hendricks Chapel. SU students can sign up online the weekend before a class. In the first of the three scheduled sessions on Oct. 1, Byrd and Lowe taught a recipe for a taco bowl. The next classes will feature a recipe for a twist on instant noodles on Thursday at 7 p.m. and a recipe for flatbread with vegetables on Nov. 12.

The lessons are held on Zoom, and participants receive free ingredients from SU food pantries and Pete’s Giving Garden, SU’s food garden. This means participants do not have to worry about getting ingredients for the class and can instead focus on learning simple and healthy recipes.

“When you’re at home, mom and dad cook, but then you come to campus and you’re using a pantry,” Byrd said. “We wanted to find a way to really highlight some of the products in the pantry and teach students how to use them.”

Byrd came up with the idea to host virtual cooking classes for SU students after attending one herself this year. The classes offer a chance to engage students with food and to provide some guidance for students who might be less confident in the kitchen, Byrd said. 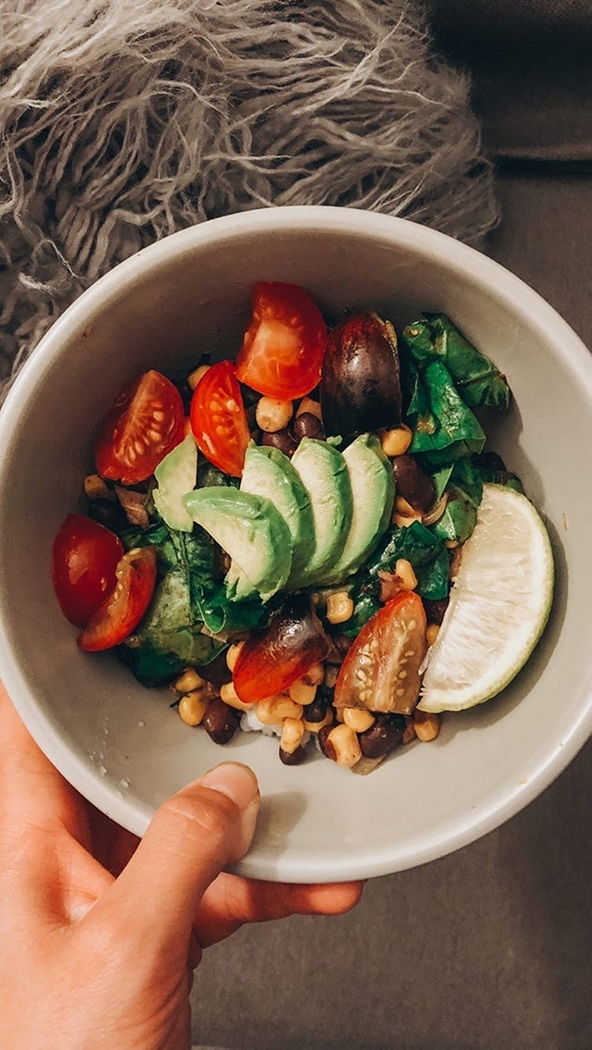 In the first session, participants made taco bowls. Courtesy of Samantha Jezak

While the classes have hosted participants with varying levels of culinary skill, Lowe said the goal for each student has been the same: to increase their comfort level in the kitchen. Some students in the first class had prior experience with cooking and were learning to use spices and further develop their cuisine expertise. There was also a student in the class who had almost no experience and wanted to learn the basics.

The classes have also taught knife skills along with the best ways to handle food. One tip from the first class, which focused on reducing food waste and making the most out of a meal, was to save vegetable scraps in the freezer to make a stock later.

Students are eager for the classes as well. In the first class, some students were cutting vegetables before Lowe and Byrd told them to.

“We had to slow them down a little and say, ‘Here’s the proper technique to cut into garlic or peeling garlic.’ They were surprised by some of the techniques and they were like, ‘Oh, next time I’ll try,’” Byrd said. “They were just so excited to cook.”

SU junior Samantha Jezak signed up for the taco bowl recipe class after hearing about the program on Instagram. Jezak, a nutrition science major in Falk College, had prior cooking experience and was particularly interested in learning culinary techniques.

During the session, Lowe and Byrd gave instructions on when to cook certain ingredients and the best ways to season the food. Jezak said the taco bowl she created was “much more flavorful” than anything she has previously cooked.

Byrd and Lowe hope to continue the classes into next semester and possibly expand them to cover additional recipes. Beyond the kitchen skills, though, Lowe tries to emphasize the joys of cooking in the classes.

“My goal for students is to just have fun in the kitchen,” Lowe said. “It’s an area that brings so much comfort to me. If you think about food, we all eat it, we all love it, we all have our favorite things.”

Foods to Avoid and Eat

7 Low-Carb Diet Foods That Can Help You Lose Weight