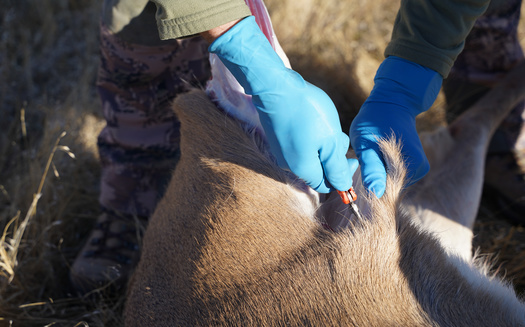 Over the past four years, North Dakota hunters have donated more than 7,000 pounds of deer and other wild game meat to food shelves across the state. (Adobe Stock)

Those concerns aren’t going away, and an annual program that links hunting with food donations could provide a needed boost.

During a recent ten-week span, the U.S. Census Bureau conducted its “Household Pulse Survey” to get a read on issues such as food insecurity during the crisis. In North Dakota, as many as 50% of respondents said they relied on food pantries during most of those weeks.

Andrea Olson, executive director for Community Action Partnership of North Dakota said with the potential for more need, they again will help stock those shelves with meat donations from hunters across the region this fall.

“This is just a really easy way to get this source of protein into the hands of the people who need it,” Olson explained.

The Sportsmen Against Hunger Program started in the mid-2000s. It asks hunters to donate deer and elk meat and other designated game to pre-approved meat processors. The products are then delivered to food shelves throughout North Dakota.

Olson said most years the program collects from 1,500 to 2,0000 pounds of meat from hunters. Given the magnitude of the current crisis, she said these sources of protein will be especially helpful for food banks as they traditionally run short of such items.

“It’s really easy to access the standards, like noodles and sauce and those types of things,” Olson remarked. “But it’s the perishable items that are often difficult to receive via donations.”

She also said those items are often too expensive for food shelves to buy in bulk.

Organizers say there are no extra hoops for recipients to jump through. The program relies on monetary donations and grant funding to pay for the processing of all donated game.

Disclosure: Community Action Partnership of North Dakota contributes to our fund for reporting on Community Issues and Volunteering, Health Issues, Hunger/Food/Nutrition, and Poverty Issues. If you would like to help support news in the public interest, click here.

Is Saturated Fat Good or Bad for You? It Depends on the Science.