Home Superfood Entrepreneur wants Uganda to have a bigger slice of the $7bn market... 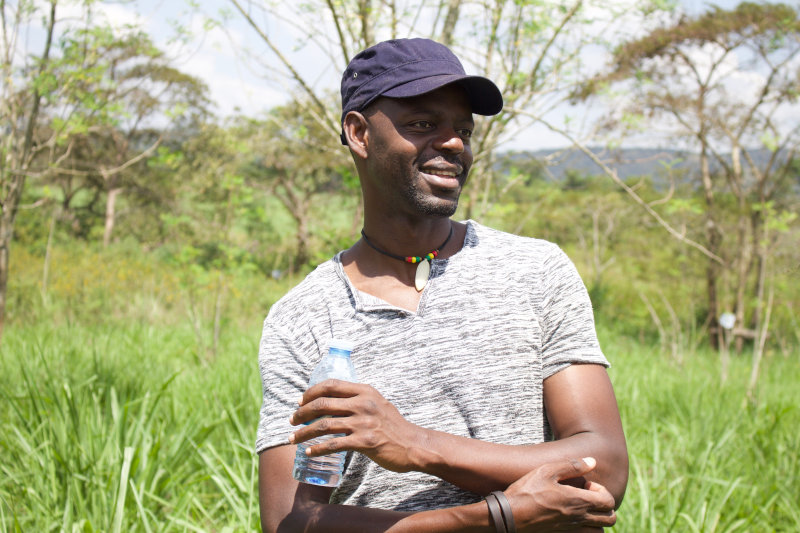 Uganda based Raintree Farms, established in 2012, specialises in the production and processing of organic moringa, a crop known for its health benefits. The company’s farm and processing facility are located in western Uganda near the town of Masindi. How we made it in Africa spoke to Teddy Ruge, founder and CEO of Raintree Farms, about his journey so far and the potential of the moringa crop.

You helped establish Hive Colab, Uganda’s first innovation hub and startup incubator. What prompted the shift from technology to agriculture?

It was actually a simultaneous happenstance. The seeds for both entities (Hive Colab and Raintree Farms) were planted in the same year. Hive Colab is celebrating ten years this year and the origins of Raintree Farms started at the same time, but only coalesced as an idea two to three years later.

I was working in the US at the time, only coming to Uganda every now and then. I worked as a development blogger and I was really interested in connectivity on the continent, things like the undersea cable projects that were happening. It got me excited about the connected future of the continent and the intersect of Uganda’s young population and the future of technology-driven development. So, I thought we could really add value by providing space for these young entrepreneurs to learn about technology in a safe and collaborative environment. Hive Colab took everyone who was sitting and working in their bedrooms or internet cafes at the time, bringing them together and sharing infrastructure costs. This business, of course, focused on the “one percenters” who had an interest in and access to the digital economy.

I was also interested in what happens at the last mile of development – in the rural, traditional communities. I wanted to bring something to them, but not something that is new. I wanted to rather accelerate what they already had: the generational tacit knowledge of farming. Raintree Farms could aggregate the production from the mostly subsistence farmers, do value addition and sell it in the relevant markets and in this way create cycles of prosperity.

Why did you decide on the moringa crop for Raintree Farms?

It was through a process of elimination. I was visiting home one summer and got up early, jetlagged from the flight, to find my mother already busy in her garden in the compound. She was weeding around a crop I did not recognise, and she identified it as aloe vera. I was confused about why she was growing aloe vera. It turns out the government had hyped up the crop to farmers, indicating a big international market. Nothing, however, had materialised of the promised market.

I started investigating and found that, over a number of years, there had been a series of projects like this where the government was promising a market for a crop, but never did the actual work of setting up the infrastructure and assistance so that farmers could benefit.

It was impossible for subsistence farmers to realise the opportunities that the government promoted. I wanted to step in and provide a solution to the problem.

I investigated aloe vera as an option, but the market for it was really tight. Through a process of elimination, we landed on moringa. It was already grown, and the farmers knew what it was. It grew easily and was low maintenance. More importantly, it was a $7.1 billion international market. Also, the continent was only providing 9% of the global supply of moringa, while it can literally grow from north to south as a commercial crop.

The initial research took a couple of years. I was working remotely from Washington DC, using my remittances to get the project off the ground. In 2012 we took the decision to jump in with both feet and bought a piece of land. We planted our first trees that same year and by 2014 we were ready to start production. We put up a small factory at first to start production, and then in 2015 expanded the factory to increase output to the quantities we needed for export. Raintree Farms grows moringa on its own land and also buys from other smallholder farmers.

Due to the fact that we then had an actual physical presence, the farmers started trusting that we were there to help and not to take advantage. We then started working hand-in-hand with them. By 2015 we had seven farmers supplying to us and today we have around 125, just before Covid hit. This totals close to 250 acres under plantation with 124 direct employees.

Who was Raintree Farms’ first client?

In 2014 a Canadian called me, stating that they were setting up a new company in Uganda to produce nutritional products and wanted the main ingredient to be locally sourced moringa powder. We produced about 760kg that year for them, figuring out the process as we were going along.

We then realised that it was prudent not to have only one customer and set our sights internationally, only to realise that for access to the international market, we needed organic certification. It is an annual inspection that happens and we take care of that on behalf of farmers. Two to four times a year we also bring the farmers in for refresher training on what is required for the certification. It took us a while to get the organic certification. We only got it towards the end of 2017 and could start exports in 2018.

We’ve had some steady growth. Our peak production before the Covid shutdown was around 75 tonnes per year. It has, of course, fluctuated. This is agriculture in Africa, after all. You get just about every obstacle that you can think of, or don’t think of, thrown at you.

Raintree has launched a programme to stabilise the incomes of new-to-market smallholder moringa farmers. Explain the thinking behind this initiative.

We introduced a whole new model of farming that is helping the company in terms of securing uninterrupted supply and assisting the farmers to have a steady and secured income every month.

Moringa leaf powder production works the same way as tea – you can harvest multiple times a year. So, we went to farmers and indicated that we can secure their monthly income by taking the estimated annual aggregate production from the minimum one hectare that they dedicate to us, and then divide the estimated revenue to pay them monthly. This way we are making sure that they have the same amount of money every month. It gives farmers an important financial injection to assist in the possible transition from subsistence to commercial farming. It provides them with an alternative from going into the production of unpredictable seasonal crops to diversify their income.

Describe the main uses of moringa; which industries are your main customers?

Our customers internationally are in the wellness nutraceutical industry. Essentially it is the companies that produce supplements using natural, organic additives.

Moringa is heavily used as a nutritional supplement. They make pills out of it, also nutrition and energy bars and smoothie mixes. It is a powerful immune booster and our first customer in Uganda, for example, was a company that produced moringa pills specifically targeted at HIV/Aids patients to rebuild their immune system after antiretroviral use, as well as pregnant and nursing mothers. Raintree Farms aims to be active throughout the entire moringa value chain.

Internationally we have that same client base, the ones who are essentially introducing a new superfood to the world. One of the customers in the US is Kuli Kuli Foods, which is a pioneer in moringa-based products in North America.

The export markets are guided by our organic certification. We are certified to export to North America, the EU and Japan, but mostly our customer base has been in North America and the EU.

You’ve also launched the Qwezi Beauty brand. How did this come about?

The idea originated due to the flexibility and versatility of the moringa crop itself. Just about every part of the plant can be commercialised or has a use, whether in medicine or beauty or in food. We saw that we could leverage that versatility for much broader entry into the consumer market. We want to own the entire value chain. In order to do that you have to be able to develop products directly from the fields through the entire value addition process to the shelf.

Qwezi Beauty was the lowest hanging fruit for us. We press oil from the moringa seeds. It is a highly effective oil for use in beauty products because of the natural benefits it has, the purity of the oil and its gentleness on skin.

It just made sense to develop this brand. The margins from exporting a commodity like oil are very thin, but if you go several steps up in terms of the value addition, you are immediately able to multiply your profitability by several factors. It also protects the company from the shocks of international export by multiplying the customer base infinitely.

Qwezi Beauty Moringa Oil was the first product we launched, and we are currently working on about 10 to 15 SKUs under that brand. These products will be launched in the next six to 18 months.

Are there any other products that you are thinking of?

We are considering using the leaf powder to produce our own health products and supplements. We are also looking at herbal teas. These will be hitting the local market pretty soon.

It is easier to launch beauty products than food products because of the requirements in terms of health and safety, so it is a longer process that we have in the pipeline.

Qwezibeauty.com is already live and will eventually power our international distribution. When we say we want to control the entire value chain, we really mean it.

How competitive is the moringa industry?

I am not protective of what we have learnt and our intellectual property. The global market for moringa products is $7.1 billion and it is projected to be at $10 billion by 2025. I am not naïve to think that Raintree Farms can produce all of that, I just want a sliver of that. But my passion is to make sure that as many farmers as possible can benefit from that market. We’ve trained other companies, we’ve provided seedlings, we are also a founding member of Face of Moringa Uganda. This creates a bigger market pie for everyone to participate in. I will be ecstatic if Uganda can be the epicentre of high quality moringa on the continent by 2025.

Could Breadfruit Be the Next Superfood? Researchers Say Yes

9 Foods That Help Kids Get a Better Night’s Sleep