Researchers from the University of Oxford and the London School of Hygiene & Tropical Medicine (LSHTM) evaluated the efficiency of the Eatwell Guide for a healthy diet. They also assessed how the guide can help reduce greenhouse gas emissions and alleviate climate change. 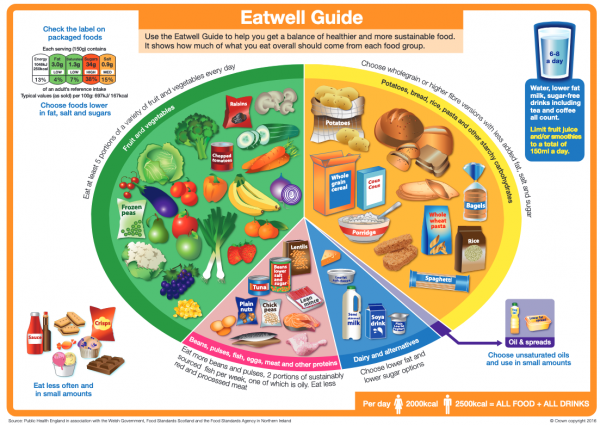 According to the Million Women Study, UK Biobank, and EPIC-Oxford, people following at least five recommendations from the Eatwell Guide had about a 7% reduction in risk of death. Consuming just fruits and vegetables reduced mortality risk by 10%.

Those who followed between five to nine recommendations from the Eatwell Guide contributed to reducing about 3.5 pounds of carbon gas emissions per day, with an average daily reduction of about 30%. Data from the National Diet and Nutrition Survey showed that only a tiny percentage of the population follows the entire Eatwell Guide.

Nearly 44% of those following the guide only adhere to three or four recommendations. The least followed guidelines include the daily recommended consumption of omega-3-rich fish and fiber.

In 2016, the government designed the Eatwell Guide to help people eat healthy and balanced diets. Currently, obesity has become a nation-wide problem in the United Kingdom. Around the world, nearly two billion adults are obese and overweight. The Eatwell Guide is also environmentally friendly and more sustainable than other diet guides.

The Eatwell Guide includes recommended portions of fruits, vegetables, whole grains, and carbohydrates. Lower portions of dairy, fat, meat, and oils are recommended. The guide also encourages people to choose low-fat and low-sugar options as well as plant-based options for milk. The guide also says that six to eight glasses of water or other healthy fluids should be consumed daily.

Dr. Pauline Scheelbeek from LSHTM shared that her team’s study shows how ‘Eatwell Guide forms an effective first step towards more healthy and sustainable diets in the UK.’ If people followed more of the recommended guidelines, the population would have greater health benefits and help lower their environmental footprint.

To further reduce greenhouse gas emissions, there is a need for ‘more transformational dietary shifts’ than just following the Eatwell Guide, Scheelbeek said. There is also a need to reduce water footprints, or how much ground and surface water is used for growing crops and maintaining livestock.

Professor Alan Dangour from LSTHM’s Centre on Climate Change and Planetary Health said that Public Health England can help meet environmental and health targets for everyone in the UK. ‘Following the Eatwell Guide would substantially improve human health in the UK and reduce our nation’s footprint on the planet.’

Check out more news and information on Diets on Science Times.

©2017 ScienceTimes.com All rights reserved. Do not reproduce without permission. The window to the world of science times.

Is high fructose corn syrup bad for you? All excess sugar is unhealthy