Home Superfood Sight Magazine – Bogota’s second lockdown: normality for some, hunger for the...

Street vendor Angel Torres was starting to see the light at the end of the tunnel as Colombia’s capital Bogota eased four-months of coronavirus restrictions which had left his family hungry.

But the income from his job selling face masks is now in jeopardy due to a second lockdown imposed on many of the city’s poorest neighbourhoods amid a surge in new infections.

“Unless I can…persuade the police at the road blocks to let me through to work, we don’t have another option but to eat less,” said the 53-year-old who provides for his elderly mother, sick sister, wife and two teenage children.

“I don’t know how we’ll survive if I can’t earn any money,” said Torres, who settled in a hillside slum in south Bogota after being displaced by Colombia’s civil war in 2001. 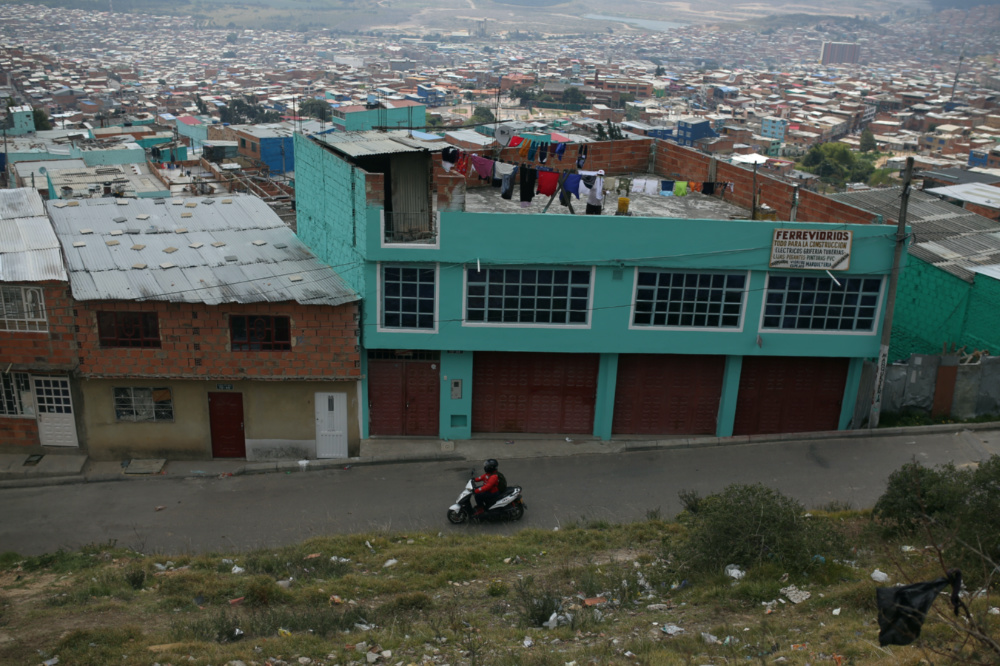 A person on a motorcycle rides down a street, amid the coronavirus disease (COVID-19) outbreak in Bogota, Colombia, on 16th April. PICTURE: Reuters/Luisa Gonzalez/File photo.

Attempts to stem the spread of COVID-19 in Latin American cities from Bogota to Panama have exposed disparities between men and women and the gradual re-shutting down of certain city districts is showing the profound ways in which different neighbourhoods delineate wealth and opportunity.

With Bogota’s hospitals overwhelmed and a predicted coronavirus peak in mid-August, the city’s mayor, Claudia Lopez, has imposed a renewed lockdown in parts of the capital with the highest infection rates that are mostly home to the city’s poor.

With Bogota’s hospitals overwhelmed and a predicted coronavirus peak in mid-August, the city’s mayor, Claudia Lopez, has imposed a renewed lockdown in parts of the capital with the highest infection rates that are mostly home to the city’s poor.

Torres who lives in Usme – a slum crammed with shacks built from brick, wood and scrap metal – is one of eight districts that have gone under quarantine.

The measures will affect the lives of about 2.3 million people in a city of eight million.

Another four neighbourhoods are set to begin lockdown on 27th July and a final three enter quarantine on 10th August.

Bogota is a city starkly divided by the rich neighbourhoods of apartment blocks and gated communities of the north and the hillside slums of the south and west.

Most of the areas facing renewed quarantine are home to slum dwellers and the city’s most vulnerable, including Venezuelan migrants and hundreds and thousands of families displaced during Colombia’s 52-year war that ended in 2016.

Some districts being locked down are home to pockets of the middle class and wealthy.

In poor neighbourhoods, many cannot afford to stay at home. They are part of a vast informal economy made up of cleaners, maids, street sellers and builders who rely on daily cash-in-hand earnings to buy food and pay rent.

Residents in quarantined districts are being ordered to be at home from 8pm until 5am, and only one person per household can go shopping within the neighbourhood for essentials each day. 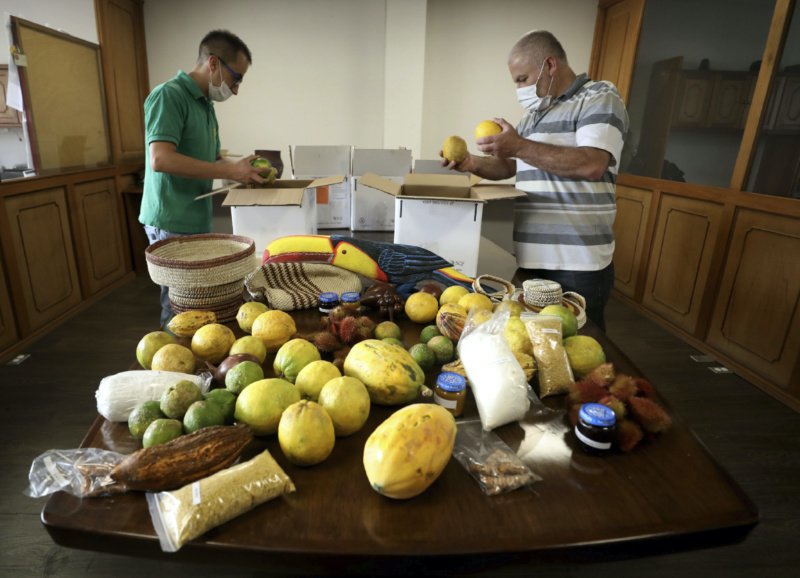 Workers pack crafts and fruits from the Amazon on a box before ‘The Harvest Amazonian Barter’ will deliver to people who subscribe to the service in Bogota, Colombia, on Tuesday, 7th July. A group in Colombia is providing farmers in remote areas of the Amazon jungle with food and hygiene products in exchange for some of the fruits that they harvest and that would otherwise go to waste because of the coronavirus pandemic. PICTURE: AP Photo/Fernando Vergara.

The luscious fruits of the Amazon jungle still grow, undeterred by the raging pandemic.

But many Colombian farmers and Indigenous communities have been left without a way to sell their harvests, and without the wherewithal to buy the staples of daily life.

Seeing this need, two siblings launched The Harvest: Amazonian Barter. Now dozens of people line up every Friday in front of a truck packed with soap, rice, oil and other products that they exchange for fruits that would otherwise go to waste because of the virus.

The fruits are then flown more than 1,000 kilometres from the town of Leticia, which lies along the Amazon River at the border of Brazil and Peru, to the Colombian capital of Bogota. Then they’re delivered in boxes to people who subscribe to the service, along with a guide to understand the exotic fruits, the best way to eat them and their nutritional value.

The project was started in March by Bogota-based Adriana Bueno, who heads Habitat Sur, an NGO that works with communities in the Amazon, and Ivan Bueno, who runs a hardware store in Leticia.

“Our goal is food sovereignty, understood as the rights of all peoples to choose their food and to produce it in a conscious way that respects the environment,” he said.

“The coronavirus has been the best ground for this because the system is in a halt…The system has shown that it’s not capable of dealing with this, so it’s an open ground for creativity.”

Each Friday, farmers – mostly women from the community of Nazareth in the outskirts of Leticia – walk or take river boats to bring their fruit to the swap spot. Bueno and others hand out face masks, and then pay them with a scrip currency called La Semillas, or The Seeds. Farmers use the scrip to buy products.

More than 3,500 people have joined the exchange and about 250 boxes have been delivered, Bueno said. They cost about $US30, and their contents vary depending on the harvest. Fruits can range from the cupuacu that comes from the cacao plant, to the oily purple berry of the açai palm tree that is a staple of native Amazon cuisine and that has become a global superfood.

“We try to always go with wild fruits, and even when they’re very delicate we manage to deliver them safe and sound,” Bueno said. “It’s spectacular because you open your box and you say: ‘What’s this?’”

Bueno said the project is not yet making a profit. Deliveries are limited for now; the supply is great, and some fruit rots in the humid jungle before it can be flown to the capital. But he said there has positive feedback from the community, including a local priest who recently praised the project for uniting people around their land and roots at a time of crisis.

That, he said, is “an immeasurable value.”

Across Bogota, movement is also restricted based on citizens’ ID card numbers and wearing face masks is mandatory for all outside their homes.

Hundreds of police officers have been deployed across the quarantined districts, closing off neighbourhoods by setting up check points, barricades and yellow tape.

“The quarantine was done by sectors to minimise the economic impact,” Mayor Lopez, who enjoys approval ratings of nearly 70 per cent, told local media last week.

Small businesses, including hair salons, internet cafes and car repair shops, which had reopened a few weeks ago have closed their shutters once again.

Across Colombia, at least 6,500 people have died from COVID-19 and more than 190,000 cases have been reported, according to figures from John Hopkins University. Neighbouring Brazil, the world’s number two coronavirus hot spot after the United States, has registered at least two million confirmed cases.

In Bogota, more than 60,000 people have tested positive for COVID-19, stretching hospitals to the limit where intensive care units have reached 90 per cent capacity, health authority figures show.

Yet in Bogota’s affluent northern neighbourhoods where the rich and middle class live in apartment blocks and gated communities with guards outside, COVID-19 infection and community transmission rates tend to be low and daily life has largely been unaffected by the new lockdown measures.

Yet poor neighbourhoods and sprawling slums have become COVID-19 hotspots due to a lack of access to sanitation and healthcare services and poor nutrition while cramped housing makes social distancing almost impossible.

Five districts under fresh lockdown, including Ciudad Bolivar – a vast mountaintop slum where some residents collect rainwater in buckets because they lack running water – account for more than half of all cases in Bogota.

To help the city’s poorest, Mayor Lopez has pledged government aid to 700,000 residents living in freshly quarantined areas, of which 550,000 people will receive a one-time cash transfer of about $US70 – equivalent to about a quarter of the minimum monthly wage – while the remainder will get food parcels.

Sandra Reyes, who lives in the north-western district of Suba, worries how she will put food on the table when her neighbourhood goes into full lockdown in four weeks’ time.

Since she lost her job as an office cleaner due to the pandemic in April, she has been taking two buses involving a 90-minute ride with her young daughter and nephew to reach a rich neighbourhood where she begs at traffic lights.

“I didn’t have to beg before. Now I do. I rely on people to give me anything – clothes, food and coins,” the 32-year-old said.

“I don’t know what I’ll do when the new quarantine starts. I’ll have to save some food now. I’m taking it day by day. I pray to God for this to end,” Reyes said.

Sea vegetables are the superfood of 2020, so here’s what you need to know

Have you tried ‘mirror glazing’ a dessert?