As diet-related health problems continue to increase among Americans, the American Society for Nutrition is calling for a new approach to federal nutrition research.

In a white paper released today, the American Society for Nutrition recommends several changes to improve coordination and funding of federal nutrition research, which currently is spread out across at least 12 federal agencies and departments:

The white paper, published today in the American Society for Nutrition’s American Journal of Clinical Nutrition, was created by experts in medicine, law, policy and more. Dariush Mozaffarian, the dean of the Tufts Friedman School of Nutrition Science and Policy and a cardiologist, was a co-author and principal investigator. The Rockefeller Foundation provided financial support of the project.

Related: The Analyst’s Take: Personalized nutrition set to be a $4.2B opportunity

Mozaffarian says he wants the white paper to be the beginning of a conversation on improving nutrition research with the goal of improving Americans’ diets and overall health.

“I really look forward to a national conversation on how we can improve and strengthen federal nutrition research to create a strong country with a healthier, more equitable and more sustainable food system,” he said Wednesday in a Bipartisan Policy Center online event. 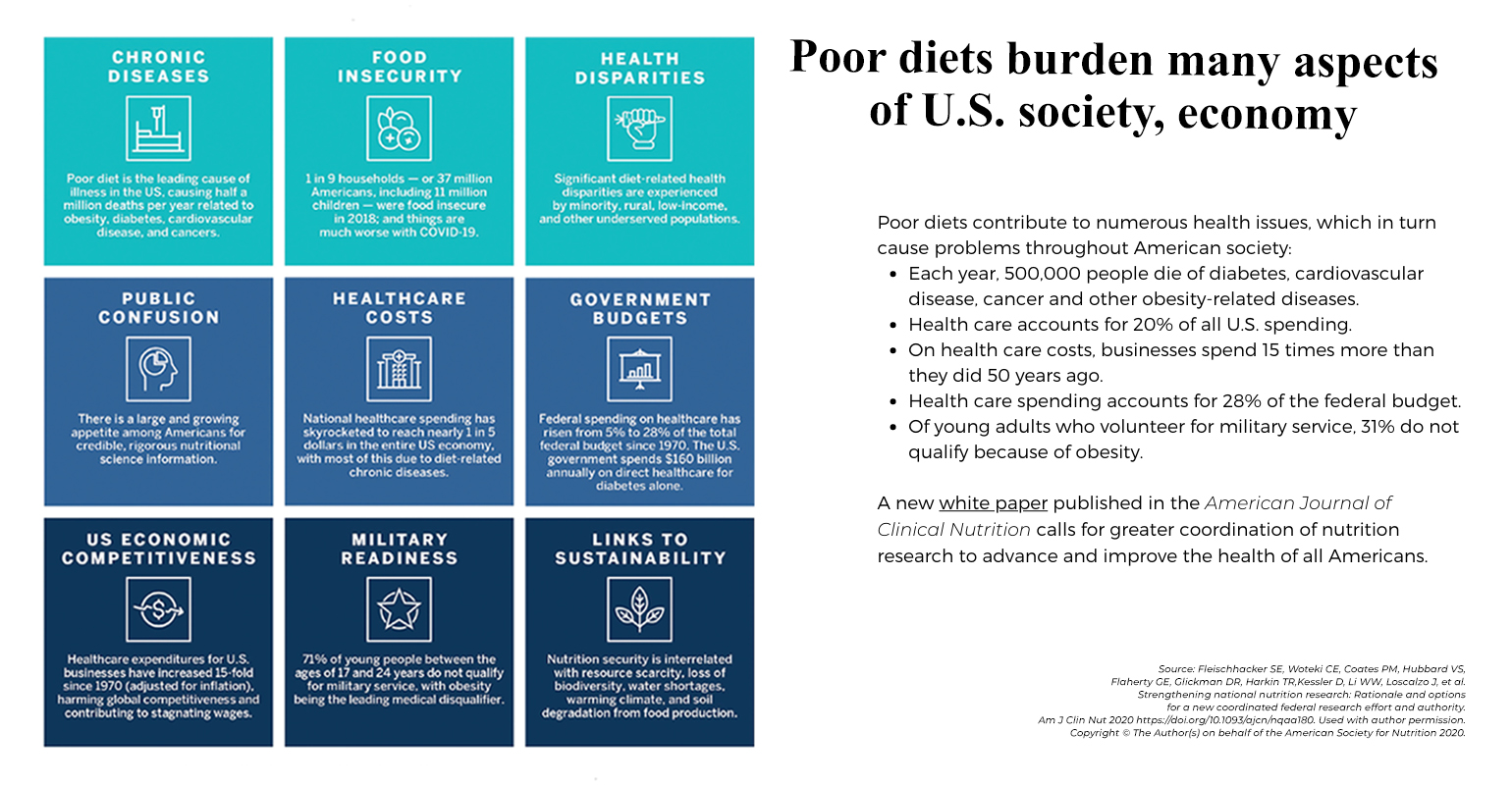 More Americans are sick than healthy, the study reports, with almost three-fourths overweight or obese and half suffering from prediabetes or diabetes. Diet-related illnesses such as obesity, diabetes, cardiovascular disease and several cancers are increasingly more common. Yet, a recent study cited in the white paper found that nutrition was the “top cause of attributable deaths” with 19.1%, but nutrition research receives only 6.7% of NIH’s prevention funding—$430,000 million.

“The investment has not kept up with the pace of the disease burdens we’ve seen,” Mozaffarian said in the video presentation.

The NIH and the USDA provide the most funding for nutrition research, $1.9 billion and $170 million, respectively. Other agencies and departments that support nutrition research include the Centers for Disease Control and Prevention, the Food and Drug Administration, the Department of Defense and the Department of Veterans Affairs. But coordination of that research is poor because no single authority oversees it.

Although the ASN wants to see more funding for nutrition research, the organization also wants the research to be better coordinated. That’s where the Office of the National Director of Food and Nutrition comes in.

This director, who would be appointed by the president and confirmed by the senate, would advise the White House, Congress, military and other government officials on matters of nutrition and diet. The director also would coordinate the research among the federal agencies, improving their effectiveness and synergy, the white paper submits.

The researchers modeled this new office on the Office of the Director of National Intelligence, which was formed after the 9/11 attacks in New York, New York, and Washington, D.C., exposed the cracks in having different intelligence agencies working independently without oversight.

“Similarly, COVID-19 has showed us how fragmented our food system is, and the Office of the National Director of Food and Nutrition could help that,” Mozaffarian said.

The white paper’s authors also recommend creating a National Institute of Nutrition and a National Center for Nutrition Research, both within the NIH. Congress would have to approve this new institute and appropriate new funding for it, Mozaffarian said. The NIN would lead research, training and outreach on nutrition and health topics, collaborate with other agencies and departments on joint research, and create partnerships with outside firms to generate innovative research and projects, according to the white paper.

“NIN should not take away from [existing] nutrition research,” Mozaffarian said. “We would want all the incredible nutrition research going on across NIH to continue and be strengthened with the addition of an NIN.”

To support the USDA’s mission of providing public guidance, education and nutrition assistance programs, funding for that agency also should increase, the authors suggest.

The recommendations for cross-governmental cooperation, changes in the NIH and more investment in USDA research would all work together to improve the federal research landscape, Mozaffarian said.

“Crucially, we found that all of these are complementary, so this is not ‘either/or,’ these are ‘and.’ 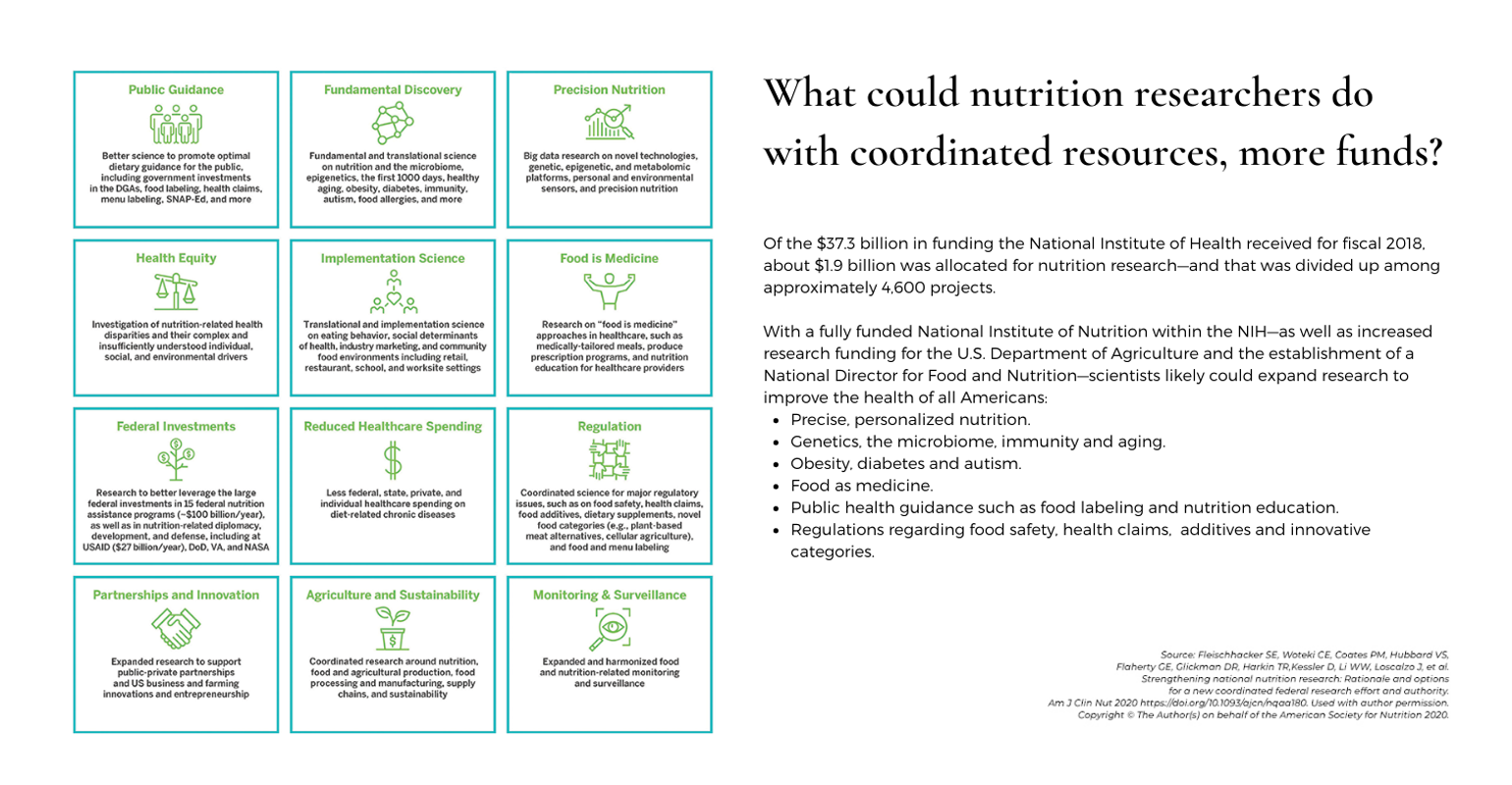 Diet-related illnesses impose many costs on the United States, including health care expenses and reduced productivity. So how will we benefit from implementing the ASN’s recommendations?

During the Consumer Federation of America’s National Food Policy Conference in March 2018, then-FDA Commissioner Scott Gottlieb captured the value of nutrition research. “Improvements in diet and nutrition offer us one of our greatest opportunities to have a profound and generational impact on human health …The public health gains of such efforts would almost certainly dwarf any single medical innovation or intervention we could discover,” he said.

Each dollar spent on NIH funding would generate between $1.70 and $3.20 in economic returns, according to 2012 analysis. Federal research is used in commercial innovation, in patented projects and to generate additional research. In 2011, NIH findings supported 7 million jobs, the white paper notes.

Of course, the biggest benefit would be having a healthier, more resilient population—the need for which has been brightly apparent since the beginning of March, as Mozaffarian pointed out in his online presentation. 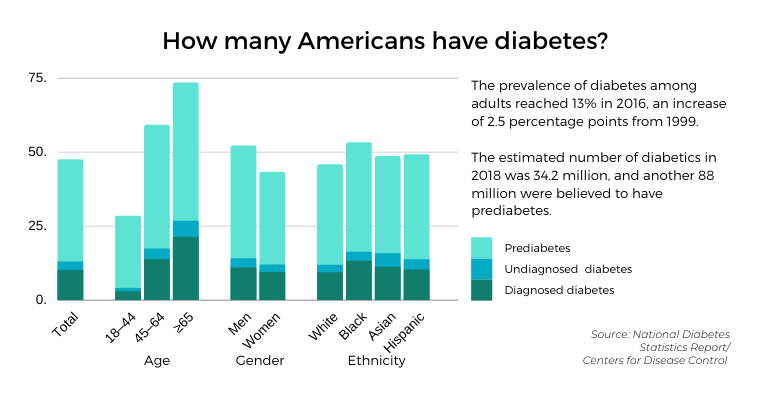 Since the 1970s, Americans have been eating more, with larger portion sizes, more frequent meals away from home and increased snacking. We eat more processed foods and more carbohydrates, and we drink more sugar-laden beverages.

Studies show that 45.6% of adults and 56.1% of children consume poor diets, and most others have diets of intermediate quality. Even without reading those studies, you see the consequences: More people carry excessive amounts of extra weight. In 2018, 42.4% of adults and 19.3% of children were obese.

What’s hard to see, though, is the chronic illness and premature death that result:

In its discussion of diet-related burdens, the white paper did not discuss Americans’ quality of life. For example, some diabetics experience the amputation of a lower limb, kidney failure or blindness. Losing the ability to work—after suffering a heart attack or stroke, for example—could upset someone’s standard of living and force them to accept disability income.

Health care costs disrupt all aspects of our economy. Total health care spending—including goods, services, public health, administration, insurance and investment—totaled $3.6 trillion or $11,173 per person in 2018. That equals 17.7% of the gross domestic product in 2018, up from 6.9% in 1970, according to a Centers for Medicare & Medicaid Services report cited in the white paper.

Approximately 85% of health-care spending is related to treatment of diet-related chronic diseases. In 2016, direct health care and indirect economic costs of cardiovascular diseases total an estimated $316 billion a year; of diabetes, $327 billion a year; and of all obesity-related illnesses, $1.72 trillion a year, the white paper reports. (These costs represent only a portion of the total cited above.)

In the past 50 years, health care costs have consumed ever-increasing shares of budgets for governments and businesses.

Health care spending now accounts for 28% of the federal budget, up from 5% in 1970. Diabetes care alone costs about $160 billion a year—more than the government spends on each of several departments or agencies, such as the departments of Education, Homeland Security, Justice or the Environmental Protection Agency.

Businesses also shoulder increasing health care expenses, to the detriment of competitiveness, wages and benefits. Businesses have seen health care costs increase to $1.18 trillion in 2017 from $79 billion in 1970, in constant dollars.

Lowering the cost of health care would allow private businesses to grow; governments to fund other priorities and needs; and give both small businesses and families some breathing room in the budgets. A healthier population that pays less for health care could be more innovative and create more jobs, the white paper authors point out.