This is what the PERFECT lunchbox looks like: Doctor shares the healthy preschool meal she packs for her three-year-old daughter

An Australian doctor has shared the exact foods she packs in her three-year-old daughter’s lunchbox for preschool.

The mother-of-two also added fresh produce to the box, including farm grown cherry tomatoes, which were cut in half, and sliced up apple cucumber. 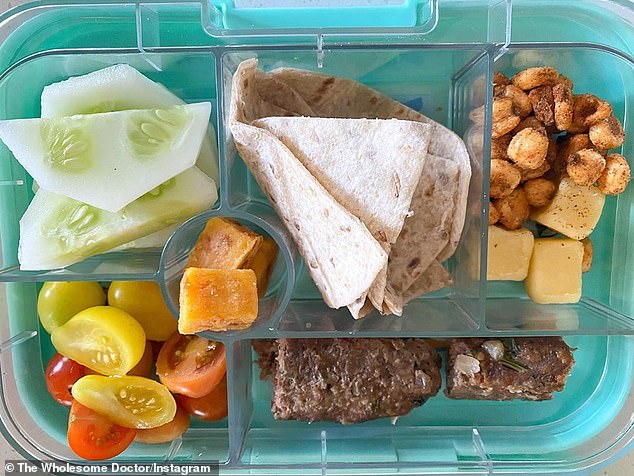 An Australian doctor has shared the exact foods she packs in her toddler daughter’s lunchbox for preschool – including lamb kofta, wholemeal wraps and cut up veggies 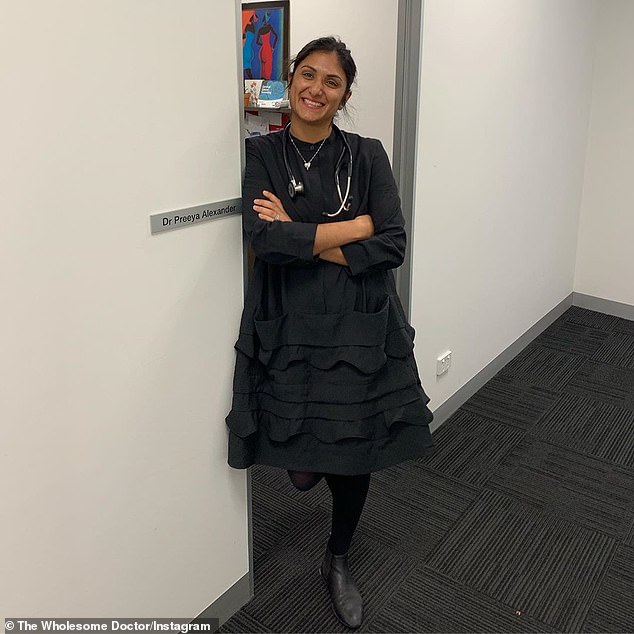 What makes a healthy lunchbox?

‘For a child Miss S’ age – three years old – the recommendation is for two-and-a-half serves of vegetables per day; to reduce risk of childhood obesity and obesity related diseases,’ the GP said on her Instagram page called The Wholesome Doctor.

‘A serve is a cup of raw veg (like what’s here) or half a cup of cooked veggies. I try to sneak veggies in with snacks as well to get in as much as possible (green beans, celery or carrot with dip for instance.’

For morning tea, she served her daughter banana, yoghurt and cheese stick.

As modern schools succumb to strict health guidelines, Dr Alexander – who publishes medical insight on her social media account – has been sharing her lunchbox ideas online.

Last week, she shared another snap of her daughter’s lunchbox. The picture showed a homemade pizza – ham, pineapple, fresh tomatoes, chopped baby spinach, cheese and tomato paste on a wholemeal base.

‘Miss S is involved in making the pizza, choosing the rainbows and we eat the same stuff at meal time so everyone has rainbow tummies,’ Dr Alexander said. 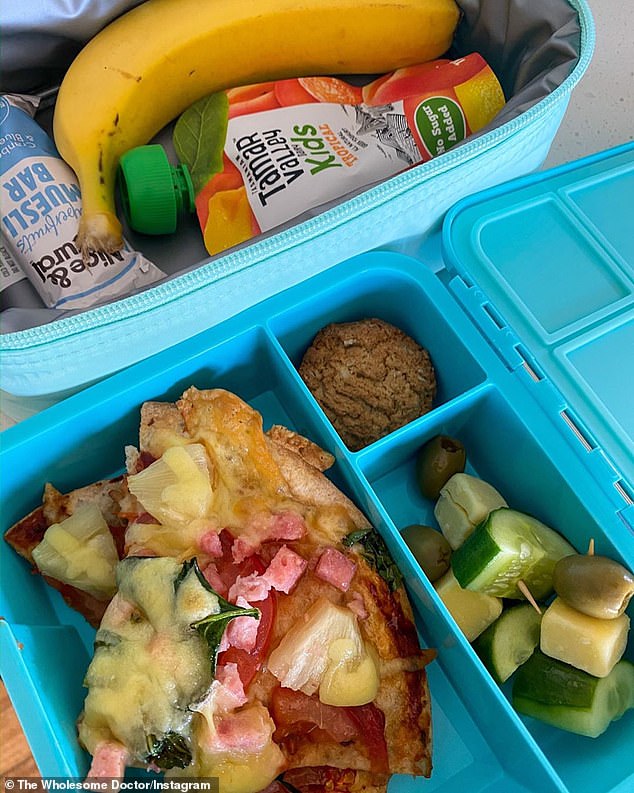 Last week, she shared another snap of her daughter’s lunchbox, which included homemade pizza, cucumber, cheese and olive sticks and a cookie

What each food group is good for

Breads and cereals: Source of carbohydrate which is a major energy source for the brain and body.

Fruits: Contains lots of vitamins and fibre. Aim to include one to two serves of fruit per day.

Dairy: Major source of calcium. Include one serve in lunchbox every day.

She suggested homemade pizzas were the best way for parents to ‘bump up the veggie content’ for their children.

The box also included ‘party sticks’ which were cut up cucumber, cheese and olives and a cookie.

‘Party sticks is named by myself to make it fun. Miss S goes crazy for olives. You could put whatever you want on these,’ she said.

Dr Alexander said her daughter loved her food so much, she returned home with a ‘virtually empty’ lunchbox.

‘Whatever your kid loves (pizza and olives in our case) use it – and veggies, pack it – that’s my motto,’ she said.

‘I’m very aware this stuff isn’t easy but this is how I give it a crack and make it fun at our house. Nothing fancy, no rabbit shaped or rocket shaped cut out quiches – if I could I would though but just some rainbows in a lunchbox,’ she said.

Get fit in 15 minutes: The best nutrition and exercise for improving your posture

Nutrition: The rest of the smoothie story

Public Parks Matter More Than Ever During a Pandemic